Hip-hop star Travis Scott, who is known to be a generous person, has offered to pay the first-semester fee for five students who will attend colleges and universities historically known for offering admission to Bla-ck students. The ‘S!cko Mode’ h!tmaker took to his official Twitter account to drop the big announcement in a series of tweets. The 29-year-old first tweeted: “AND I KNOW SCHOOL JUST STARTED AND I WANNA TAKE CARE OF 5 KIDS TUITION FOR THERE FIRST SEMESTER OF SCHOOL !!! WHY NOT!!!!!” Then replying to the same tweet, he added, “THAT ATTENDS AN HBCU” The American rapper then got a little specific and stated, “5 KIDS THAT ATTEND A HBCU Send me ur schools ya heard !!!”

The moment the rapper posted his tweets, his comment box got flo-oded with reactions and requests. Travis even replied to one of the student’s requests on his wall and said, “My mom always wanted me to go here.!!!! 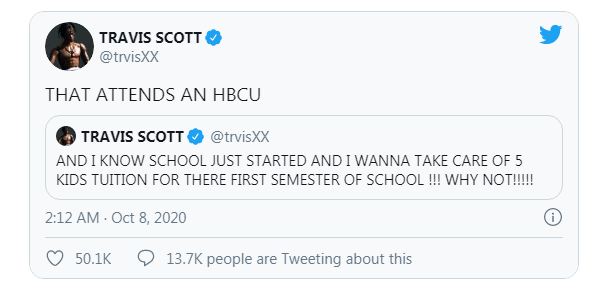 So I got u, bro !!! Just lock in and come out of there ready to change the world.” One student posted a request and said, “Jenae ‘nae’ talison mass communications major with a concentration in media leadership I attend Tennessee state university and my plans are to become a media mogul and be the first bla-ck woman to be CEO of a streaming service.”

However, one user indirectly stated that the majority of the rapper fanbase is White and hence he would lose them by announcing his offer. The user tweeted, “that elim-inates about 95 percent of your fanbase.”

My mom always wanted me to go here.!!!! So I got u bro !!! Just lock in and come out of there ready to change the world. https://t.co/VwWwr0SswO

Another made fun of the Travis’ tweet with a funny video and posted, “the white ppl that thought they had a chance.”Another commented, “my girl went to TSU her aunt took a loan out under her name and never paid it off and then we had a baby together we been saving trying to get her back into school slowly but surely if you could help her out I would greatly appreciate it she owe 7k no dad real mom on cra-ck.” We are sure the fee of the first semester of five students does seem a lot but maybe not to Scott because apart from his music sales, the rapper also rakes-in a lot of “mo-olah” from his business ventures, music tours, and brand deals across food, clothing, shoes and more. According to Forbes, the net worth of Scott, as of 2020, stands at a whopping $39.5million. 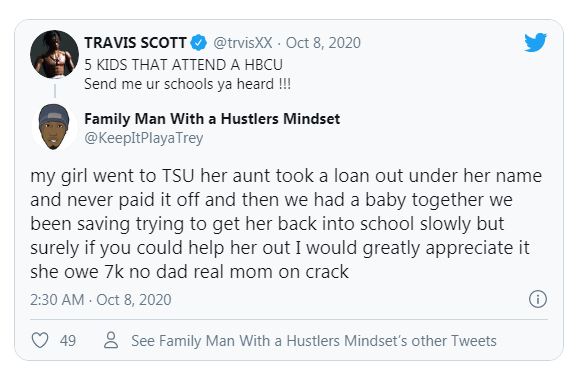 In September 2020, the hip-hop entrepreneur, who is among the highest-paid rappers in the world, cra-cked a long-term partnership with the fast-food giant McDonald’s for his own signature meal under which he also dropped exclusive merchandise for the fans. Scott also owns a brand called Cactus Jack under which he has launched a few products like sneakers, merchandise, action figures, and more.

the white ppl that thought they had a chance: pic.twitter.com/9HwRPp8jJG

The record producer then filled his band accounts by cra-cking a deal with the Fortnite concert series in April 2020 amassing more than 27 million viewers. Though it was never clear how much Scott earned through this partnership, it was rumored that he did make $2.5million from virtual me-rch sales. The Business Insider reported that in 2019, the rapper partnered up with General Mills to design a box of Reese’s Puffs where the $50 limited edition boxes got sold out in 30 seconds. As Forbes reported, the rapper’s Astroworld tour grossed $53.5 million in 2019, which also ended up as the year’s top hip-hop roadshow. Scott also made a huge amount of money after he joined hands with the minimalist fashion brand Helmut Lang in January 2017 to design clothing. 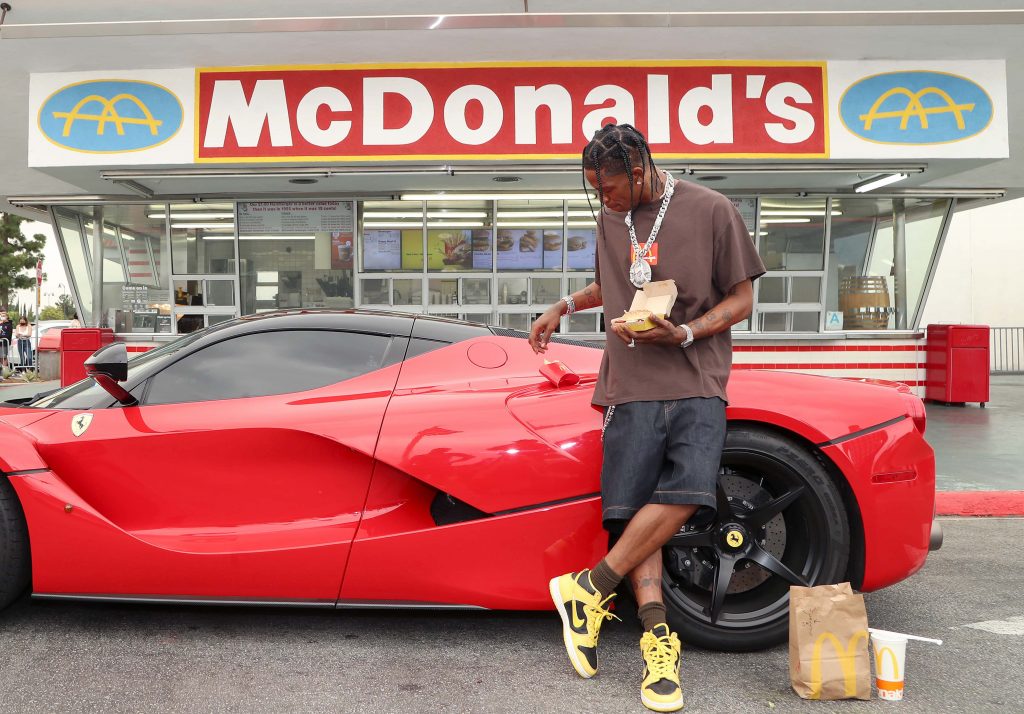 He has also collaborated with Nike to redesign their iconic Nike styles like the Air Fo-rce 1, the Jordan 6, and the Du-nk. The award-winning rapper not only makes good money but also spends like a fortune. He she-lled out a whopping $23.5 million in June 2020 to buy a mansion in Los Angeles’ Brentwood neighborhood. The artiste also owns multiple high-end cars like Bugatti Chiron, Lamborghini Huracan, Lamborghini Aventador, Range Rover, Ferrari 488, and LaFerrari among a few others. Well, Travis Scott is surely living a dream and his philanthropic acts only make us respect him.

This Article First Published On MEAWW