A US woman has been forced to apologize to a formerly home-less man after she tri*d to hu*ilia!e him online. Luann Cofield had been eating at a McDonald’s restaurant in the state of Georgia last month when she s*ot-ted a man sleeping in the restaurant booth, using his backpack as a pillow. Ms. Cofield was so confronted by the scene, she decided to take a photograph of the sleeping man and share her dis!ust with friends and family. What she didn’t realize was that the man was 21-year-old Simon Childs, a home-less father of a four-month-old boy, who was attempting to get some sleep between his shifts at McDonald’s.

Ms. Cofield posted the photograph to Facebook, accompanied by a long passage explaining this scene was “just another reason for me to leave Fayetteville”. 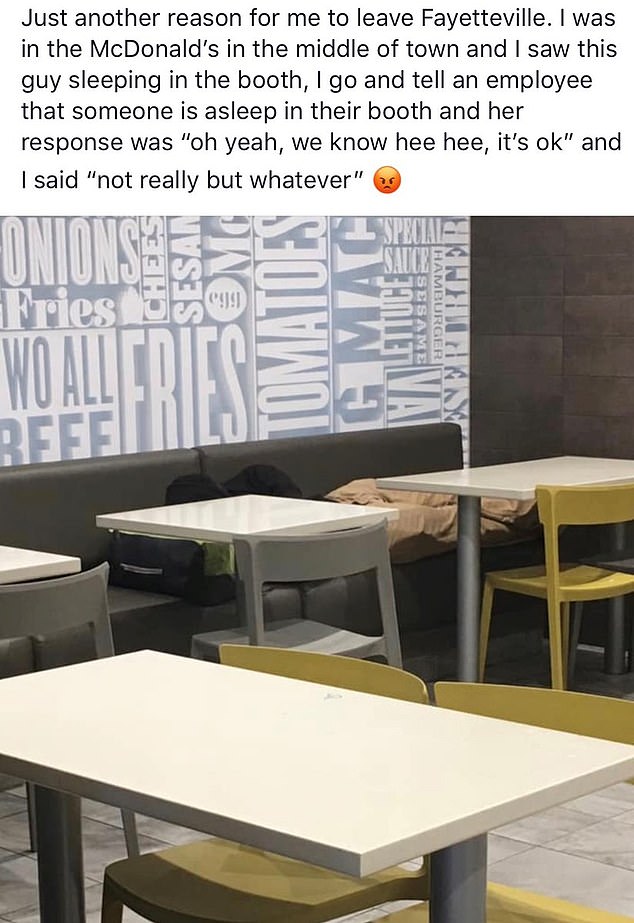 After Cofield’s post went viral, members of the comm-unity came forward to defend the man, explaining that he had recently l**t his mother and had fallen on h*** times. 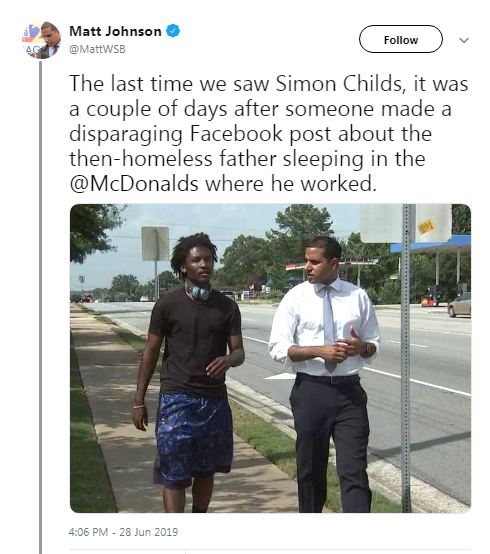 She received major b*ckla*h from people who condemned her for judging and atte-mpting to shame someone who situation she did not understand, with many branding her behavior “sha*efu!” and “cr- uel”. A local news crew from WSB-TV covered the story and that week, people began traveling to the McDonald’s restaurant where Mr. Childs worked to leave donations for him and his baby son.

Ms. Cofield was for*ed to delete her Facebook account and but was moved after seeing the hu-ge outpouring of support for the man she had posted about. She reached out to WSB-TV to arrange a meeting with him and apologize for her hu*tf*l act. Through tears, Ms. Cofield told the camera: “I didn’t want to hu** him.” When the pair officially met, Ms. Cofield gave Mr. Childs a hug and apologized. “I’m sorry that, you know … because that ho-rrif*es me, that bre- aks my heart, for you,” she said. But according to Mr. Childs, he was, in a way, grateful she had posted a photograph of his unfort-unate ci!cumst-ance at the time.

“I’m no longer sleeping in a McDonald’s, so that’s good,” he said. “I feel great.” Thanks to the community’s donations, Mr. Childs now has an SUV, new clothes and a new job in construction he started this week.

People also arranged for nappies, clothing, and supplies for his young son. A local family even took Mr. Childs into their home so he wouldn’t have to sleep in a McDonald’s booth any longer. He told WSB-TV he wanted to use some of the money donated to him to help other home-less families in need. “I actually want to use everything I’ve gained from this to help other home- less people,” Mr. Childs said. He also thanked Ms. Cofield for the indirect impact her acts had on him.

“Thank you, not for the post, per se, but for helping me pick my life up off the ground,” he said. The response online to Mr. Childs’ story has been overw hel*in!ly positive, with people around the world congratulating him on his new job and new life.

“Great story about how when the intent to shame goes the polar opposite and in a POSITIVE way!” one man wrote. Another woman added: “What she meant for evil, God meant for good. God bless you #SimonChilds and your baby.” But many weren’t as forgiving of Ms. Cofield’s actions as Mr. Childs was.“Luann Cofield was disgusted enough to expose Simon Childs on Facebook without his knowledge,” one man wrote. “Without even bothering to ask the McDonald’s staff why they were allowing him to sleep there.”